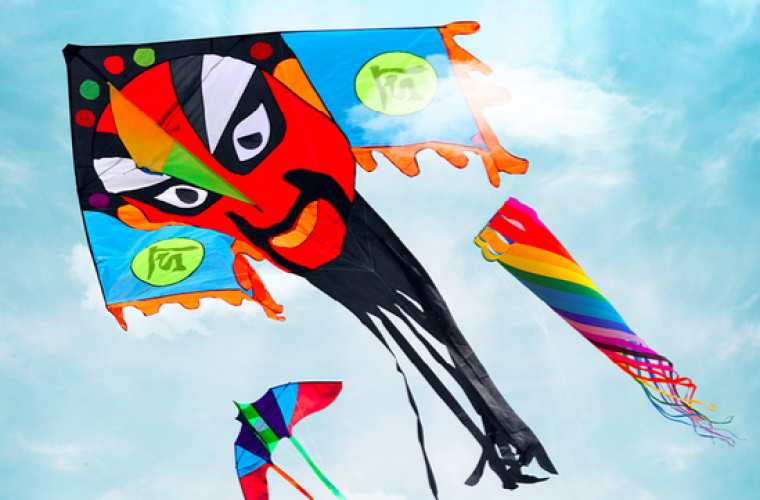 From  4th  to 6th of February most of the Asian world celebrate the beginning of the Lunar New Year. As one of the most significant holidays of the Korean calendar, it is marked by various traditions and rituals (you can see more about them in the previous article). Here will be presented one of the most beautiful of them– the flying of the New Year’s kites.

The Republic of Korea has a long lasting tradition of making kites. From children’s toys to military purposes – they were used in all kinds of spheres. The legend tells that back in the 7th century, general Kim Yu-shin used a burning kite in order to raise the spirits of his army. At the eve of a great battle his warriors saw a falling star, and considering it a bad omen, refused to set foot on the battle ground. Then the general decided to set a kite on fire and fly it in the air. Thus he managed to reassure his troops that the star had returned back to the sky and it was safe to face the enemy.

What is more, the ordinary people also used to engage in what seems to be true sky duels, mastering the skills of flying a kite. They organaised competitions during the winter, around the New Year, which were extraordinarily popular. There are dozens of different types of Korean traditional kites – they may be shaped as animals, fish, people, birds, while the most common ones are rectangular, and they all catch the eye with their colorful pictures and beauty.

However, the fighting kites were not made specifically for aesthetic reasons. They were usually constructed from bamboo sticks and traditional Korean paper in rectangular shapes like shields, and were further strengthen with ground glass or porcelain powder. During the competition everyone tried to bring down the other contestants’ kites by engaging in complex maneuvers in order to cut their strings. The winner was the one who managed to keep their kite safe in the sky and the fallen kites became pray for the first who reached them.

However, on the first full moon of the New Year (대보름/Daeboreum) the battle turned to the realm of spirits. On this day Koreans used specially made kites, on which their names and dates of births were written, often alongside guarding spells, in order to ward off the evil demons. Sometimes they also attached a coin to the kite for the symbolic fare of its long journey, as well as cocoons or coal powder, wrapped in paper, which were set on fire. When they flew these special kites in the sky, they used to let the string fully unroll, so that the kite could reach as high as possible, and then set it free, hoping that it will take away on it paper wings all the bad luck from the previous year.

Nowadays, colorful kites still fill up the skies above The Republic of Korea. They remain one of the usual New Year family games – 연날리기/Yeonnalligi, and both children and adults take part in it.
(You can find out more about the Korean kites in this book: “Korea’s Pastimes and Customs: A Social History“).

A Visual Journey through the Universe of the Korean Alphabet

About the Christmas Spirit, the Earth Pig and More

May – The Month of Holidays: The Republic of Korea and Children’s Day