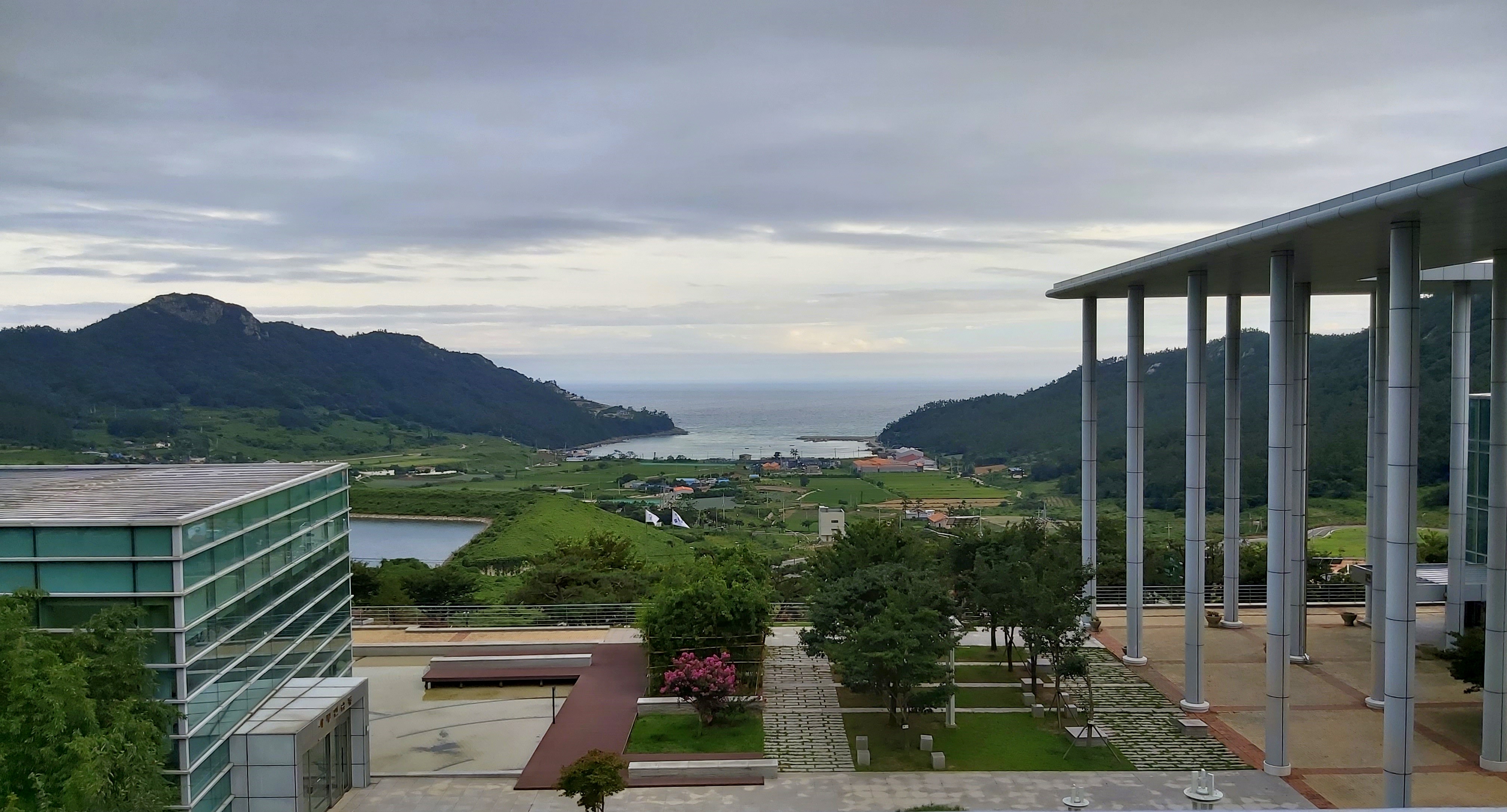 One of the Korean folk beliefs states that the most auspicious places on earth is called 배산임수 (baesanimsu), which literally means “behind me – a mountain, before me – water”. In referring to the ancient Eastern teaching of feng shui and the idea of the proper disposition of objects in the surrounding environment, it embodies the concept of reaching harmony and balance of the life forces. The traditional Korean houses – hanok, were most often built according to this orientation. It was also considered the most proper place for the last, eternal home, marking the end of a human life. Indeed, the countryside landscapes of Korea leave a trace in one’s mind exactly with their neatly arranged rice fields, the abundance of the pink flowers of the crape myrtle three; and the round mounds, peeking between them, perched on the slopes of the hills, with their gaze fixed on the sea. 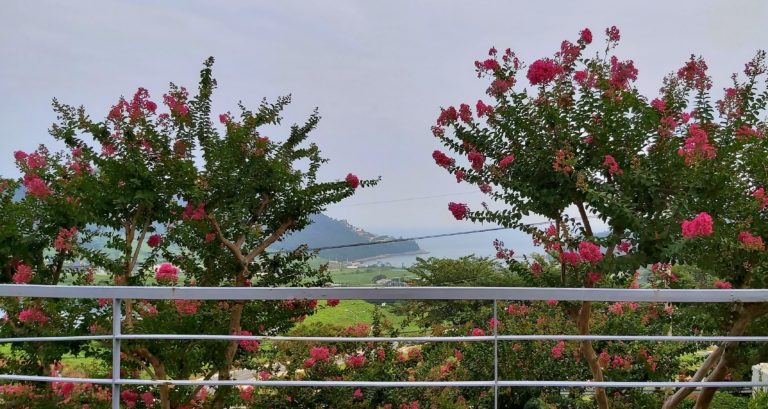 It is at such a magnetic location, in one of the most picturesque bays of the Jindo Island, that the Jindo National Gugak Center is situated. It was built in 2004 as a branch of the National Gugak Center in Seoul. Its main purpose is to explore and preserve the rich heritage of traditional Korean music and dance. This includes the royal genres of the court music, such as lyrical songs, most often accompanied by the gentle twelve-string gayageum instrument, or the mesmerizing fan dances representing beautiful sceneries of birds, flowers and butterflies. In addition to this, it follows the traces of the diverse folk music and dances such as samulnori – a quartet of percussion instruments, or the epic pansori songs, as well as ancient shamanistic art performances. And Jindo’s rich traditions undoubtedly offer a great contribution to Korea’s national treasures (more about the island – here). 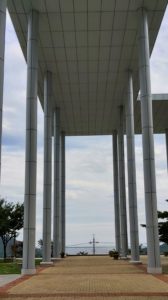 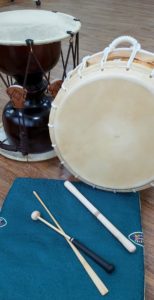 The Center offers a variety of educational and tourist programs for both Koreans and foreign enthusiasts from all over the world. Its presence on the island contributes to the flourishing of the area and its cultural life. Every Friday night, the great hall of the center leads its visitors into the kingdom of music, allowing them to immerse into its vivid melodies and enchanting rhythms. Its rich program offers a variety of traditional performances, revealing the spirit and mindset of the locals, while also encouraging innovative experiments stretching beyond the limits of the familiar, in which traditional instruments harmonize with modern ones or merge with the voices of surprising and unusual instruments such as a glass of water or a bow of rice. 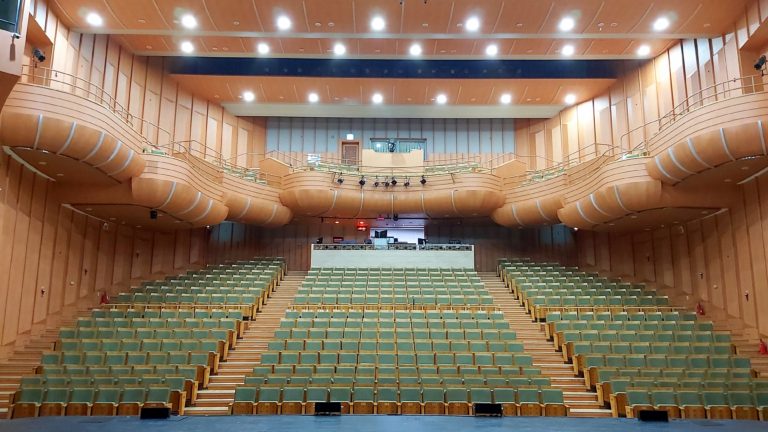 The Jindo National Gugak Center brings together groups from all over the world to join training programs and improve their performing skills. This summer, in the second half of August, the Center hosted two ensembles from Uzbekistan and the Samulnori Soyoung Ensemble from Bulgaria. We, nineteen students and five teachers from Bulgaria, participated in a two-week intensive training program on samulnori, including eight hours of practice every day, two trips around the island, visits to cultural events organized by the Center, and participation in the final concert. 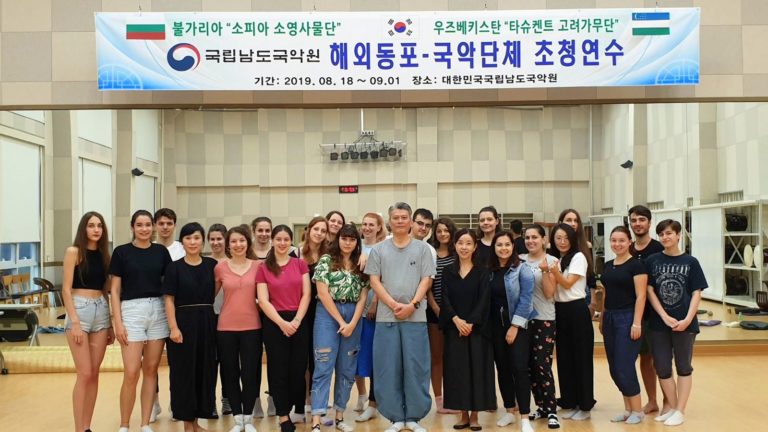 During our stay in this 배산임수 place, it became clear to us that it is laid completely in the realm of music. Everything there seemed to breathe and live in the rhythm of the drums, while the traditional sounds resonated throughout the bay uninterruptedly – from early dawn, the speakers scattered throughout the center, spread popular folk melodies, while at night the songs of the cicadas filled the air. In the end of the day, after eight hours of rehearsal, it seemed to us that even the cicadas had already learned our songs and were ready to play with us. However, no matter how exhausting the training could be, a quick glimpse at the stunning view from the balconies of the Center was enough to dissipate any fatigue. 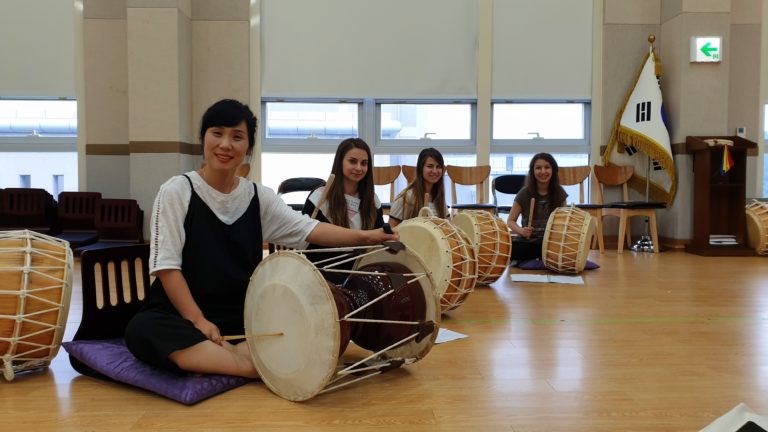 Thus, the Samulnori Soyong Ensemble has returned to Bulgaria with a richer repertoire, heightened enthusiasm and more inspiration. Find out for yourselves at the next performance – on the 1st of December, in Inter Expo Center, part of the program of the Annual Charity Bazaar, organized by the International Women’s Club. 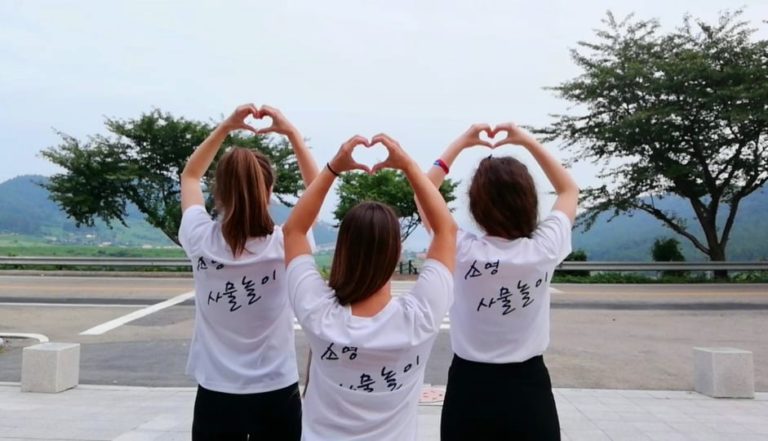